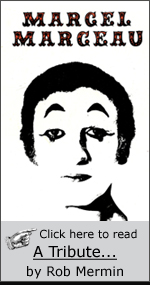 Adventures in Mime & Space: The Legacy of Marcel Marceau

I was a student of the legendary French mime masters Marcel Marceau and his teacher Etienne Decroux. In this performance lecture I explore the metaphors of mime technique and show rare film clips of the masters performing and teaching, bringing to life the essence what Marceau called “the eloquent art of silence.” The legacy of Marceau encompasses not only his virtuosity in mime, but also his work in the French Resistance saving Jewish children from the horrors of WWII. Marceau’s life as artist and humanitarian earned him the respect of the world.

The World of Circus & Mime:

I began the study of Mime in 1969 at L’Ecole Internationale de Mime Marcel Marceau in Paris, in the Theater de la Musique. Other teachers there included Gerard Le Breton, Ella Jaroszewicz, Pierre Verry, and Maximilien Decroux. I also studied with Marceau’s teacher, Etienne Decroux, and toured with Paul Gaulin and his mime company throughout Canada.

The traditions of theatrical mime in the twentieth century are bound up with the work of Deburau and Delsarte, Decroux and Barrault, and Marceau. With the passing of Marceau in 2007, it is important to impart the essence of the traditions of the mime masters to younger generations.

Mime taught me new ways to perceive the world; circus taught me how to move in the world. Mime opened the inner senses with esoteric theatrical principles of silent resonance with the invisible world, and physical articulation and projection of thought. Circus taught skills to the body for moving purposefully, acquiring athletic grace, and manipulating objects through space.

The world of a mime is in the theater; the life of a circus artist is in the ring. The one has elements of abstract artistic vision made visible in empty space; the other has elements of tangible physical achievement mixed with a lifestyle between sawdust and canvas. The blend of the two worlds encompasses centuries of overlapping traditions.

“The gesture must constantly vibrate and breathe. Even the motionless attitude in space must emit this aura, this contact which establishes itself between the actor and the public, and which we call magnetic exchange.” — Marcel Marceau
“A spoken sentence has inflection, rhythm, force. So must a movement. Mime would want to have the same domain as diction: departure point, pause, return, with the full range of subtle dynamic energies that give life to punctuation.”
— Etienne Decroux