Marcel Marceau, my teacher and mentor, died on Sept. 22, 2007 at the age of 84 years. In 1969, at age 19, I was invited by the master to attend his first school in Paris, Ecole Internationale de Mime Marcel Marceau. For 40 years I would follow Marceau’s artistry, often watching him perform from the backstage wings.

As a teacher he was inspirational and kind. Although we developed a fond friendship over the years I never called him by his first name; he was always simply “the maestro.” He indeed was the master for several generations of artists. I was fortunate to witness the humbling effect of his presence on people, even other celebrities. 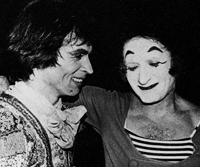 Marceau was performing in 1973 in Chicago at the same time Rudolph Nureyev was dancing in an adjacent theater. I witnessed the remarkable first meeting of these two artistic legends, both in costume, as they excitedly embraced in an alley between theaters during the intermissions of their shows. They were star-struck teenagers, each in awe of the other.

The name Marcel Marceau has become synonymous with his art. It is his unique legacy that he helped recreate a lost art, making mime a modern theatrical art form. His face and image are recognized throughout the world, comparable on a global scale only to Chaplin’s iconic image.

I also studied with Marceau’s teacher, Etienne Decroux, who was still teaching in his tiny Parisian basement studio. While Decroux was the master teacher who developed a stylized technical system of movement, Marceau was the master artist. He engaged the public with the depth of his virtuosity, the intensity of his style, and the dignity of his artistic interpretations.

Marceau was a favorite of celebrities, presidents, and kings and he never stopped traveling the world. As he once said, “Laughter and tears, comedy and tragedy, are human conditions in every culture. I am understood universally without speaking a word.” He was, however, a great and energetic talker, eloquent in several languages. A charismatic and charming man, he spoke with an intensity of expression and gesture that was accented with a penetrating look at the listener.

Marceau loved the circus but had never performed in a circus ring. In 1999 he agreed to perform a benefit show under the Circus Smirkus big top in Middlebury, Vt. The Smirkus troupe would perform the first half, and Marceau would do solo numbers for the second half. He was edgy, pacing behind the tent. I suggested he perform his “Tightrope Walker” act. He was appalled: “Non!” he cried. “How can my invisible tightrope walker compete with the real thing!”

Earlier in the day I watched the maestro practice in the ring. He was already anxious about the soft ring carpet and the technical limitations of the tent. I warned his technical director not to push the lights to 100% brightness, as Marceau liked, because it would blow out our system. As the show began, the sold-out crowd was electric, the tent was buzzing with anticipation. When Marceau appeared the applause was thunderous, but as he began his first number I glanced nervously at the lights which seemed to be up way too high. Sure enough, barely 30 seconds later the lights blew and the tent plunged into silent blackness. My heart stopped. This was unspeakable disaster. Then I heard impressive cursing in French, and I ran out to escort the maestro backstage in the blackness.

After what seemed like years of backstage panic, the lights miraculously came back on and Marceau began all over. It took all his virtuosity to overcome the situation, and several acts before he relaxed into what was for him the awkwardness of the ring. It was a revelation to see him carefully adjust his performance to accommodate a full audience in the round.

Sometimes calamity is the prelude to an experience of profound grace. The day that had begun fraught with anxiety ended in transcendent triumph. By the finale he was beaming in a way I had never seen, as the audience rose as one in standing ovation. 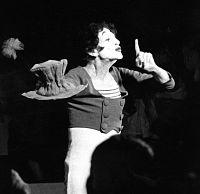 Then he raised his hand to quiet the cheering audience, and I was brought to tears at what followed. Marceau began to speak in his soft, wispy voice, and the astonished crowd hushed. Never before in his 50 year career would he speak, in costume, in front of an audience.

Marceau had made an endearing gesture by inviting all the Smirkus kids to sit inside the ring to watch his show. Then, deeply moved, he called them all around him, and brought the coaches and me into the ring. He spoke of the power of art for bringing people together, and the power of silence for bridging generations. People saw three generations of mentors standing in the ring together. Moist eyes were abundant in the tent that night. 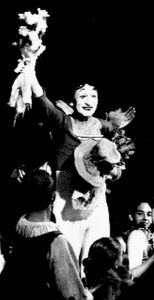 The legacy of Marcel Marceau the mime, artist, writer, teacher, mentor, and humanitarian is an integral part of the common language of world cultural history. He was an enormous gift to the world.

I cherish the words Marceau once wrote to me: “Like you, dear friend, I live to enlighten dreams. It is our common task to bring light to the art we love, the silent language of the soul. I remain with all my heart your friend in the battlefield of life, your silent Bip, and faithful Marcel Marceau.”